A big shaggy teddy bear with a heart of gold, the Bernedoodle is a versatile family dog that fits well into any family.

They are known for being amazing with children and are often a happy member of the family, especially when they can spend their days with their family.

The Bernese Mountain Dog Poodle mix, also known as a Bernedoodle, is a small to large breed of dog that has started to gain popularity over the years since it was first developed in 2003.

The breed is known for being an intelligent and affectionate companion that is very loyal to their family.

They are often described as a happy teddy bear, but there is a lot more to this silly dog than just his looks.

While they tend to be stubborn during their adolescence, the breed is very intelligent and can do very well in a number of dog sports, including agility, obedience, and therapy work.

The Bernedoodle is a bit wary of strangers but with proper training and socialization, they tend to get along with everyone. Bernedoodles is another designer breed that became popular in the last 15 to 20 years and is the result of crossing the Bernese Mountain Dog with the Poodle.

Despite starting as a mixed breed, efforts have been made, especially by Sherry Rupke of Swissridge Kennels, to develop a consistency between the puppies.

In addition, the breed has been traced back to Swissridge Kennels when Sherry Rupke crossed a Bernese Mountain Dog with a Poodle in 2003.

Since that time, continued efforts have seen more consistent breeding and owners can choose from a number of different generations including:

The reason for the generations is to move toward a breed standard and breed acceptance in kennel clubs.

At this time, the Bernese Mountain Dog Poodle is not recognized by the AKC but has been accepted by the American Canine Hybrid Club, the Designer Breed Registry, the International Designer Canine Registry, and the Designer Dogs Kennel Club.

When it comes to the Bernese Mountain Dog Poodle, appearance has not been set.

In general, what you are looking for is a fluffy, teddy bear of a dog; however, the overall build and appearance will range depending on the generation of the breed and if the breeder is breeding more for a Poodle look or more for a Bernese look.

In general, Bernedoodles are a square dog that should be the same height as they are long. They should have a thick, long, and straight muzzle and the skull should be rounded in shape.

The ears should hang and be large and wide. The overall look should be of an athletic dog with a straight topline.

Bernedoodle size really depends on what type of Poodle was used in the mix and the breed can actually be found in three sizes ranging from small to large. These are: 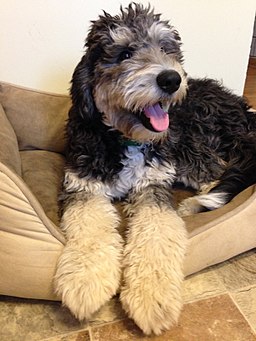 As with many Poodle crosses, the Bernese Mountain Dog Poodle can have a range of coat types depending on the parent that the puppy takes after.

It is important to note that the Bernese Mountain Dog Poodle is not hypoallergenic unless it has the Poodle coat, and, even then, it is not always hypoallergenic.

Generally, the Bernedoodle has a coat that is long and wavy with an unkempt look to them that makes them look like disheveled teddy bears.

The coat should consist of two coats, a dense, short undercoat, and a longer topcoat.

In addition to the wavy coat, you can find Bernedoodles with a tight, curly coat that is similar to a Poodle; again with the undercoat and topcoat.

Bernese Mountain Dog Poodles are primarily found in only three colors; however, there is a wide variation to markings.

The breed can be black, black and white, black and brown, or tri-colored with black, white, and brown.

As with many mixed breeds, grooming can differ depending on the coat type inherited from the parents.

Curly coats require brushing daily unless you decide on clipping the coat short, then it is done every few weeks, roughly every six to eight weeks.

For the wavy coated Bernedoodle, the coat should be brushed once or twice a week. They are a low shedding breed but they do have periods of heavy shedding where they blow their coat.

During this time, the breed requires brushing two or three times a week.

With bathing, the Bernedoodle should only be bathed when it is necessary to prevent drying out the coat. In general, once every few months is enough to keep the Bernedoodle clean.

Teeth should be brushed on a weekly basis, and it is important to check the ears weekly as well to prevent ear infections. Nails should be trimmed when necessary, usually once or twice a month.

Playful and goofy, the Bernese Mountain Dog Poodle is well known for the clown-like antics that make them loved by their family.

They are a very affectionate breed who loves to be with their people.

In fact, the breed can often suffer from separation anxiety and are not a breed for busy families who won’t be able to spend time with them.

While the Bernese Mountain Dog Poodle loves their family, they tend to be reserved with strangers and are often wary.

The breed is excellent with children of all ages, but the larger Bernedoodles can be a bit clumsy, so it is important to take care when they are around young children. The Bernedoodle has a long life span and, on average, lives to between 12 to 15 years.

While the Bernese Mountain Dog Poodle is considered to be a healthy breed, the parent breeds do have a high number of health problems that can affect the puppies.

It is important to make sure the parents of your Bernedoodle puppy are healthy and have the appropriate health testing done.

Even with the best screening, be aware that a Bernese Mountain Dog Poodle is susceptible to the following health problems:

The litter size of a Bernedoodle varies depending on the size variant of the breed.

The Bernedoodle is a versatile dog that can live in any type of dwelling from rolling farms to small apartments.

They do require daily exercise and access to an area where they can run off the leash, but the breed tends to have a moderate energy level, which makes them ideal for apartments.

The Toy and Miniature variety of the Bernese Mountain Dog Poodle mix tends to have more energy than the Standard Bernedoodle; however, their small size makes it very easy to exercise them when they reside in an apartment.

Although the Bernese Mountain Dog Poodle is an intelligent and playful breed, they are actually fairly hard to train due to being stubborn.

The breed can be quite headstrong and often prefers to do things on their own terms.

Training should be started at a young age because of this stubborn streak, and it should be done daily for 10 to 15 minutes at a time.

Training should be kept fun, and the breed learns better when they are not long, extended periods of training with a lot of repetition.

The breed is reward-driven, and eventually, they often grow out of the stubborn stage.

As the breed tends to be suspicious of strangers, the Bernedoodle should be socialized as soon as they come home to people both at their home and outside of it.

With proper socialization and training, the Bernedoodle can succeed in a wide range of dog activities or simply be a well-loved and well-behaved family companion. As mentioned already, the Bernedoodle is a breed with a moderate energy level and this means that they don’t require a lot of daily exercise.

The breed can do okay as a jogging partner after they reach a year old. However, the long wavy coat can overheat them if jogging in warm weather.

In addition to physical exercise, give the Bernedoodle intellectual exercise as well with brain-challenging toys.

These are especially good to use while you are away from home, as it will keep your Bernese Mountain Dog Poodle entertained until you arrive home.

With feeding, it is important to take your Bernedoodles size into consideration when you choose a high-quality dog food.

The amount of food will vary on the individual dog and the food provided, on average, the Bernedoodle requires 1 to 3 cups of dry food per day along with treats such as fruit, vegetables, meat, or dog treats.

In addition to food, make sure to provide the Bernese Mountain Dog Poodle with water throughout the day.

Fluffy and incredibly cute, everyone falls in love with Bernedoodle puppies and owners should be looking or a bright, happy puppy when they are choosing their own puppy.

The Bernedoodle puppy should have a fluffy appearance with handing ears and bright eyes.

While Bernedoodle puppies are incredibly cute, they are also incredibly stubborn, and new owners should be aware of this trait.

For that reason, it is important to have firm and consistent rules with your Bernedoodle puppy right from the moment they arrive home.

In addition, start the habit of training right away, so the Bernedoodle puppy learns to accept training easily.

Finally, while the Bernedoodle puppy is very affectionate with family members, they tend to be suspicious of strangers so be sure to provide them with plenty of socialization so the puppy grows up into a confident and friendly dog.

Here are a few close relatives of the Bernedoodle mixed breed:

As mentioned above, the Bernese Mountain Dog Poodle is a versatile breed that fits into most homes.

They do require a family that will include them in the activities as they can suffer from separation anxiety.

The breed does very well in apartments, especially with proper exercise.

In addition, they are an ideal family dog. They tend to be very patient and gentle with children, and they are affectionate with everyone in their family.

Although they can be stubborn with training, they are good for owners with all levels of dog experience, even first-time dog owners. Are Bernedoodles A Good Companion for Children?

Yes, the Bernese Mountain Dog Poodle Mix is a perfect companion for children both young and old. They work really well with young children from toddler age to even teenagers.

Why is the Bernedoodle Mixed Breed so Expensive?

Depending on what type of genetics or colors your Bernedoodle puppy has will determine the price of that said puppy.

Also, if the breeder decides to vaccinate the puppy or even get the dog microchipped, they will charge more.

You won’t really find this breed priced under $2,000. It would be rare for you to find a breed under this price point. Some are even more.

Can you Register the Bernedoodles?

Unfortunately, This mixed breed cannot be registered with the American kennel clubs because these clubs do not recognize all mixed breeds. It takes many years for a club association to start recognizing mixed breeds.

Yes, in a sense, these dogs are hypoallergenic because they are a low shedding breed. This does not mean this breed is 100% hypoallergenic, so it is not guaranteed to prevent your allergies.